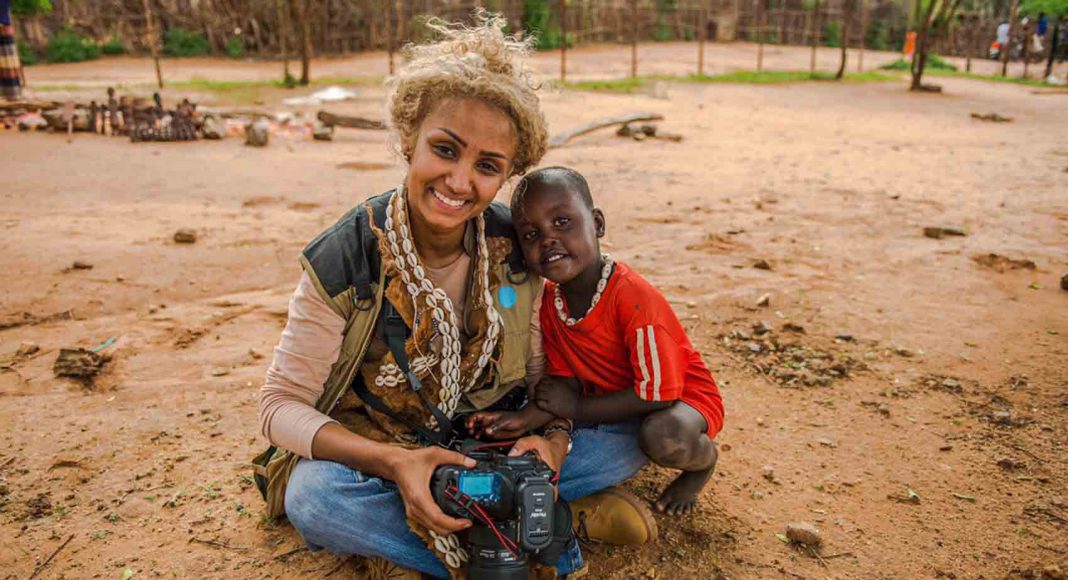 Here is the strangest love stories I ever heard

PICTURES FROM ETHIOPIA: Amal Abdullah has travelled to many countries, bur her journey to Ethiopia had a different taste. Ethiopia is a land of mystery that stirs your imagination. Amal from Bahrain visited Ethiopia during April 2015 escorted by a team of amateur photographers representing the GCC countries, Bahrain, Kuwait, UAE, Oman, Saudi Arabia and Qatar to document with their cameras aspects of life in Ethiopia. Flight took almost four hours and plane landed in Addis Ababa where heavy rain guarantees fertility. Amal took a leave from the Polytechnic University of Bahrain where she works as public relations manager.

Addis Ababa: Amal unfolded her memoirs; “We went to Orbamnj city, but stopped to tour the Witness Fields (Stelet Fields) registered by UNESCO as world heritage. After lunch I went to the city and reached my hotel at sunset. Next day we went to Lake Jammu, boarded a boat where I saw flocks of swans and hippos, but the Nile crocodiles scared me. Then I continued to Conso to visit a local village. On the way I saw the terrace fields and totem statues of carved wood representing the local gods who guard the fields”.

Murayt – Turmi; “Next morning we visited the Murayt area, crossed a river in a boat made from carved trunk of a single tree. I visited the village of Alhamar tribe where women wear a wooden Collar around the neck. A single collar indicates she is the first wife. Wearing two collars means she is second wife. Alhamar women are beautiful and have a soft skin. They cover their bodies with fur from animal skins and use bright colors as cosmetics. I shared wheat grinding with them”.

Jinka: “We headed to the hostile tribal area of Almorcee. Women fix a circular disk in the lower lip and the larger the disk, the greater the status of the woman in the tribe. I went back to Jinka for lunch and in Conso I asked the women to apply the local dyes they use. ”

Women and Lion: Though peace prevails in Ethiopia, the government is in constant conflict with the Almorcee tribe. Before a woman gets married she spends 22 days in the jungle to hunt a lion. The trophy is a sign of her success as a future wife. This habit threatens wildlife.

Amharic language is the official language in Ethiopia, but each tribe applies its own dialect. When a woman gets married she receives three blessings from the tribal Sheikh. If she has a baby he will be a blessed child.

Haile Hotel: There are Luxury Hotels in Addis Ababa and budget hotels as well. Amal spent a night in the famous Haile Resort Hotel overlooking the shores of Lake Awassa.

Wheat, corn, coffee and tropical fruits of mango and pineapple are produce of the fertile land of Ethiopia, and so are Cattle and sheep. Amal visited the Museum of Civilization, which reviews the hunting habits and the life of the tribes in the country, which is the cradle of human civilization.

Awassa Lake: “Around the banks of Lake Awassa, I spotted the largest bird species such as the Stork, and The King Fisher. The local egrets and cranes looked cool. Fishermen were busy fishing, while large birds threatened to snatch the fresh catch. After shooting pictures I had a tasty seafood meal overlooking the lake”.

Coffee: Amal speaks passionately about Ethiopian coffee. She shopped in the local Souks for honey, coffee beans and souvenirs of statues made of carved Wood. “The Coffee has a strong flavour and unique aroma”, she says.

Exotic Lovers: Amal told me the strangest love stories I ever heard. When a young girl determines to attract a young man, she will perform exotic dancing. If he fancies her, he will hit her on the back with a bamboo stick. Curiously enough, the greater the passion, the greater the cruelty of beatings!

An old proverb advice; “Whoever drinks of the Nile water will return back again.” Amal reveals she has decided to return to Ethiopia to take more shots of people in the mysterious land.

Lebanese wine: From disaster to Red and White sensation

Away from political and economic disaster. Lebanon produces top quality wine in the Bekaa Valley where summers are dry and cool nights with rainfall.
Read more