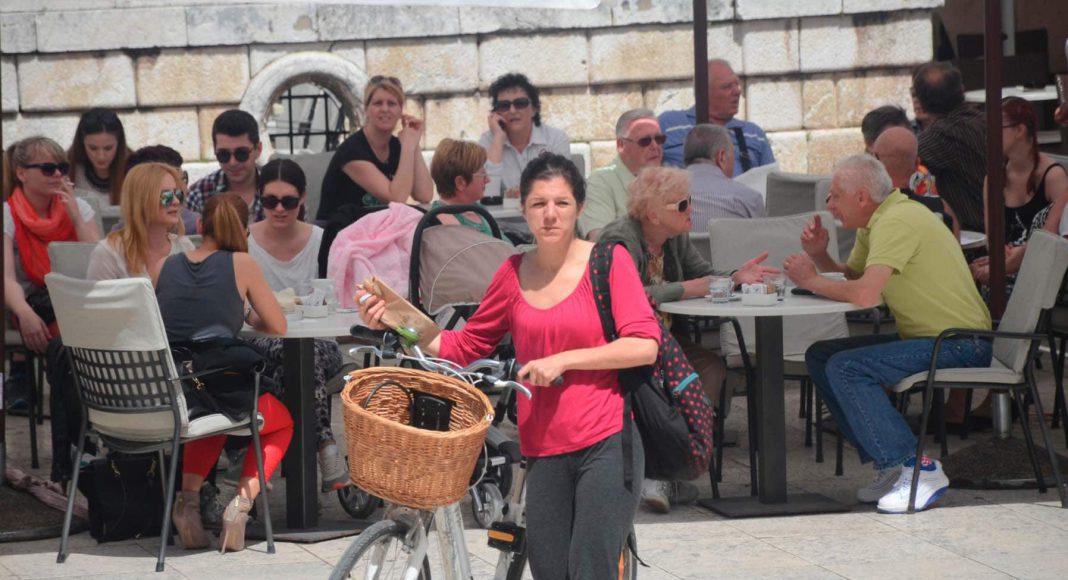 The place to hang out, eat seafood and cheese or simply watch the locals

ZADAR, CROATIA: This ancient city with 3,000 years of history has some great sights. In the old town it’s easy to find directions between Roman buildings, ruins, churches, modern shops and the Benedictine Convent of St Mary where treasures have been preserved by the nuns. No wonder Zadar is called the Permanent Exhibition of Religious Art.

Historic Zadar is the fifth largest city in Croatia and located on an island with limited access for cars. It is possible to walk from one end of the town to the other in about 15 minutes. This is the place to hang out, eat seafood and cheese or simply follow the example of Alfred Hitchcock, the film director who said that Zadar quay offered the most beautiful sunset in the world.

I came to the city after three days of sailing and some concentration on the sea. In Zadar you just need to be present. This is a very relaxed city, in this respect quite different from Dubrovnik little further south on the coast. Every morning locals flock to the old town and cafes to meet friends. Calle Larga is one of the main streets and even on a Thursday morning it reminds me of a long Catwalk with cafés on both sides. Both here and on People’s Square the sight of beautiful local women tend to be especially dominant on Saturday morning.

I met some Nuns

While most people like to hang out, the 19 nuns of St Mary Church prefer to stay indoor and take care of the permanent art exhibition “The Gold and Silver of Zadar”, which contains very old gold and silver objects and is one of the most valuable exhibitions in Croatia.

“I’ve been here for 46 years and I’m rarely outside. Here I work and concentrate on praying seven times a day. Recently Sister Johanna passed away and I had to leave the house for her funeral. She was 90 and ill for years, now we have space for another and younger nun. Here we only watch TV when our Pope has an important speech or our favourite club Hajduk Split plays an important match”, sister Ivana told.

The Forum is a huge plaza in the middle of Zadar. The Venetian Land Gate build in 1543 is a triumphal arch and the main entrance to the old town. Here you find St Donat’s Church, The Cathedral of St Anastasia, Zadar University, The Archaeological Museum, Roman Forum and The Greeting to the Sun, made of 300 glass plates in a large circle. At night it’s like being on the dance floor from Saturday Night Feever. However, The Singing Sea Organ, created by an architect, is another hangout on long evenings. You hear the Organ on the quay, creating music from the waves running through it pipes.

Every summer Zadar hosts some cool festivals. From Classic Music festival and Street Art Festival in July, The Night of the Full Moon and film festivals in August and Fig Festval in September. The coolest one is might the open air music festival on Zrce beach in Novalja located on the island Pag, a hot-spot for music-loving revellers to drink and dance the summer away. Pag is connected by road bridge to Zadar.

The Bastion Hotel is located on a nice spot overlooking the harbour. The staff is nice and helpful. My room was luxurious; the bath was great and the service spectacular. So was the breakfast as well as the food served on the terrace. The Bastion is part of an old castle and relatively expensive. But it was well worth it. I was lucky to stay here for two nights – now I have my castle in Zadar.

Seafood. Someone once named Zadar as the town of gold. But it’s definitely a town of islands and delicious seafood. Try catch of the day and black risotto with squid and octopus a restaurant next to Bastion Hotel. This place is really in a class of its own in the Old Town.

At the other end of town, Kanoba Skoblar was awarded the best restaurant of the local Tourist Board. This is the oldest tavern with stone interior and a terrace, serving fish and meat with an extensive wine list.

Get me there. Ryanair flies to Zadar Airport from UK, Belgian, Denmark, France, Ireland, Norway, Sweden and Germany. It’s also possible to arrive by catamaran from Italy (Ancona) and here is a bus/train station next to the Old Town.