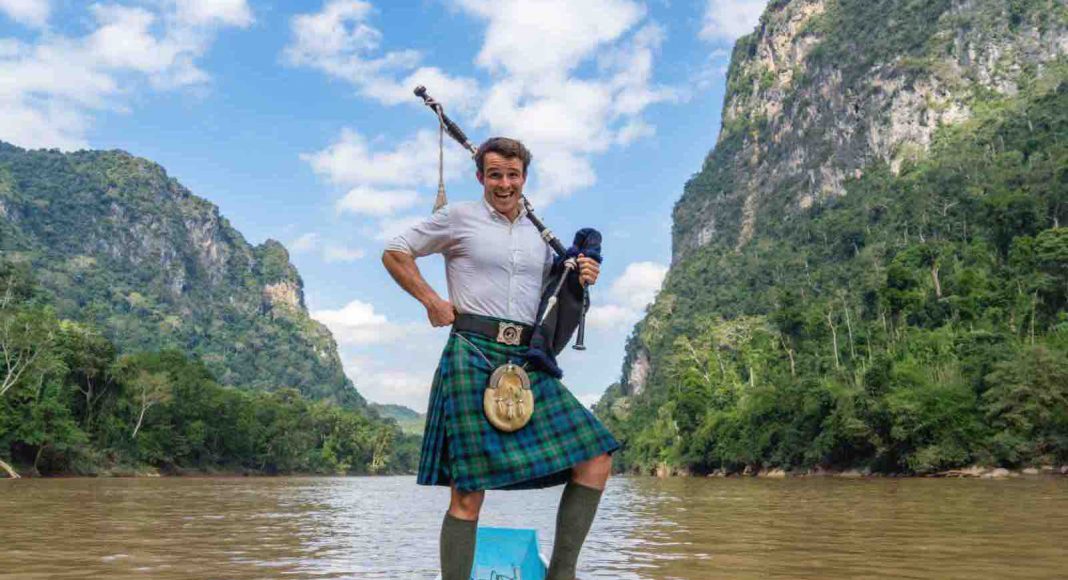 Bag-piping Ross pop in to all countries in high sounds

Always dressed in Kilt, he is bag-piping his sound around the world

Sound of the World: Ross Jennings is the travelling bagpiper. After trying out a bunch of instruments as a child, he went for the loudest one out there and when he was given the chance to learn, Ross jumped at the opportunity!
“I suppose I do have other reasons though, my mother is Scottish and my father is Irish so they’ve always wanted someone to play the bagpipes in our family and keep up a bit of Celtic tradition”, Ross says, always bag-piping and with a new place or country in the pipeline.

What’s the mission behind “The First Piper”?

I’ve always liked the idea of being the first person to do something but it was more of a fantasy than something I would actually try and do, let alone something that would involve the bagpipes! I was cycling home after being at the 2014 Adventure Travel Show in London and the idea just popped into my head, ‘I’m going to be the first person to play the bagpipes in every country.’ The more I thought about it the more I realised how much I’d already travelled with my bagpipes and how it had influenced my past adventures – it made me appreciate my slightly odd (and annoying) choice of learning to play them as a child.

I started to travel more and my initial idea behind The First Piper quickly changed as I realised the journey was a lot more important than the goal. It’s very easy to take things away from the places you travel (photos, souvenirs etc) but other than money, it’s rare that people give anything back – I now see it as a fun way of sharing a bit of my culture, a great way to make people smile and in general, a bit of an adventure facilitator!

How came the name up? I toyed around with a couple of names and none of them were really suitable. I was overcomplicating it and decided that it should just be simple and actually say what I’m going to do so I just went for “The First Piper”… to pipe in every country?

How many will you visit? I’m hoping to visit every country, although it can be hard to state whether a place is a country or a state or a semiautonomous region! I don’t want this to be a political thing because it’s more about the journey and the adventures than the actual goal; however I would like to go to about 200 “places.”

The most interesting person you’ve met? Ah, it has to be Kingsley Holgate! He’s basically a modern day Livingstone and is an absolute legend. In short, he’s a South African explorer, adventurer and author, and he’s definitely one of my hero’s. I was lucky enough to meet him when I was in Jinja in Uganda and I ended up playing and bag-piping  for one of his charity events! 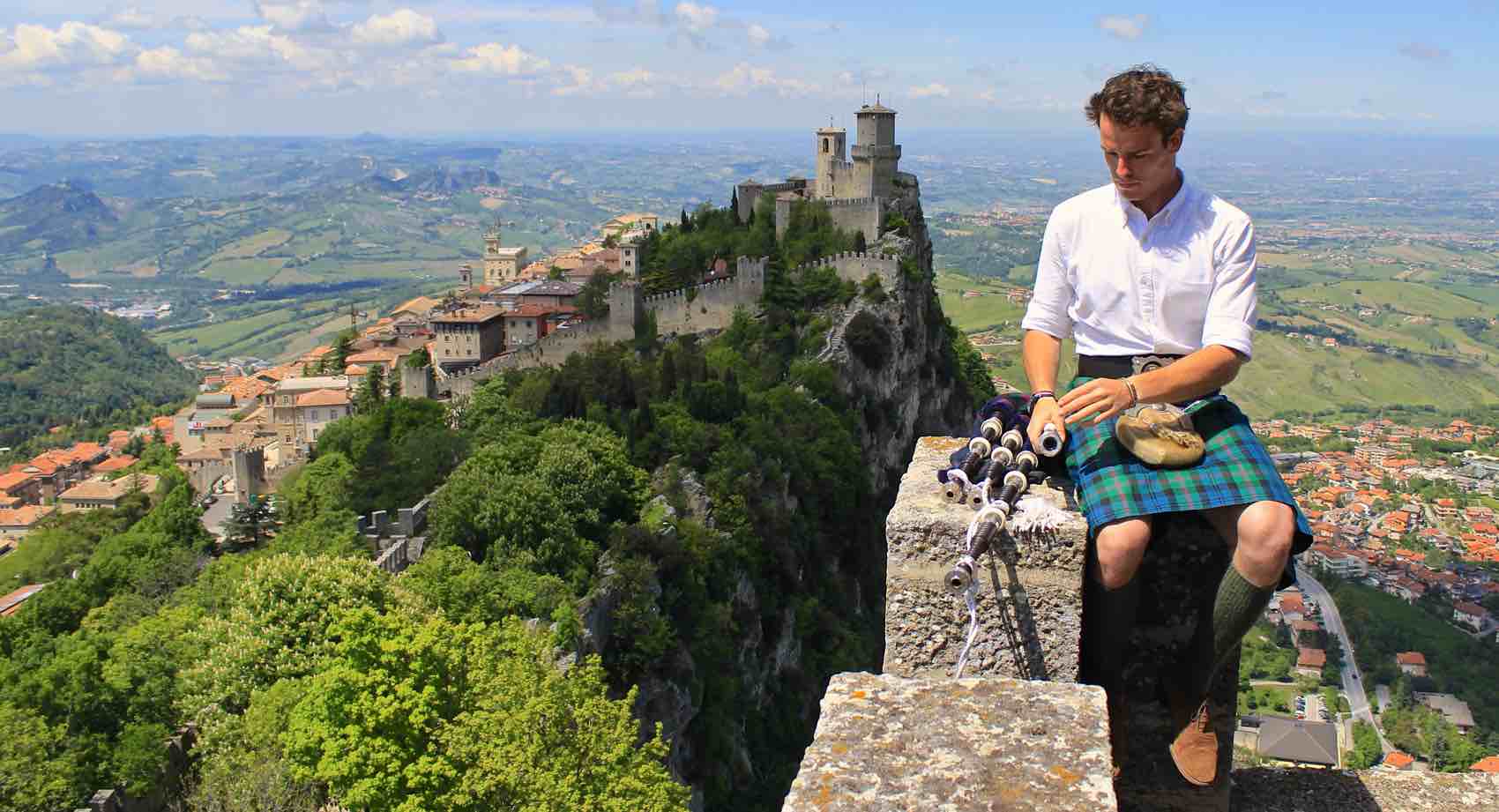 The Giraffes liked the high sounds

Any extraordinary audience? Without a doubt, a tower of giraffes! I got in contact with Giraffe Manor in Nairobi, one of Africa’s top hotels that sit on the ground of Nairobi’s Giraffe sanctuary, and they let me visit for the day. They were a bit hesitant at letting me play the bagpipes because they thought it would frighten the giraffes, but as I began playing they all started walking towards me in unison. Honestly one of the most surreal experiences I’ve had!

How do you finance the tour? Mostly my own money that I’ve saved but I also have a sponsor.

How do you travel – where do you stay? I like to mix it up. Every country I visit I try and stay with someone that I have a personal link with (either a friend or a friend of a friend), someone who lives there (that I’ve met via Instagram or Couchsurfing) and I usually end up staying at a hostel or hotel. Everywhere I stay ends up offering its own experience which is why I do it and it allows for me to be pretty flexible because I’m rather last minute when I travel!

What’s your favorite city? Very difficult question. I love Edinburgh, but I suppose that would be a boring response seeing as though that is where I’m from! I do have a couple of favourites; however, Istanbul definitely sticks in my mind. There’s something quite amazing about a place that bridges the gap between Europe and Asia.

How was your visit to Kilimanjaro? The weather could have been better when I was in northern Tanzania. I didn’t make it to the top but I did managed to get into the foothills where I met some local’s tribes and got to know the area a bit better. It is definitely something I will go back to because it would be great to be the first piper to pipe up Kilimanjaro!

In Nairobi they had to fine me

In Nairobi you were fined for playing bagpipe? I was indeed! I was practicing in Nairobi Arboretum and these two military guys came up to me and apologised for he fact that they “had to fine me” haha! Not sure if it was a bit of a scam or whether it was legitimate but fair enough. I didn’t want to cause any problems and to be honest; the bagpipes are hardly the most subtle instrument.

Any risky settings? Two places immediately come to mind. Bagpiping on the border of Rwanda and the DRC, which didn’t last long because our armed guards started pointing their guns and shouting! The other place was on top of San Marino – I have a picture of me climbing on one of the old fortresses, probably not the best decision because there was a pretty long drop below me!

The view so green

Your favourite view? Simien Mountains in Ethiopia, probably one of the best views in the world. It was being in the Grand Canyon in the States but it was so green!

Tell about a great little place you know? There’s an eco-hostel in Nicaragua called Zopilote, which sits on the side of an extinct volcano on Ometepe Island. I stayed there in the summer of 2012 and I was seriously impressed by the way things were done there. Everything was recycled and re-used and it also had some of the best tasting avocados I’ve ever had! I’m pretty sure it’s still there and it also has a website so definitely check it out if you’re heading to Nicaragua!

Where did you eat the best food? The food in Thailand is phenomenal and it’ll always be up their as a favourite because its so flavoursome, but I was also pleasantly surprised by Ethiopian food. Enjera (the everyday staple food of Ethiopia) definitely isn’t something I could eat 3 times a day but I did love it! It had the added benefit of being called a “superfood” so the more I ate, the more I felt like I was helping my body out!

I do hearing a voice

Your favorite music? Folk music is up there for sure. Any tune or rhythm that epitomises the country that the music comes from is something that I’ll always listen to. I suppose that’s one of the reasons I love the bagpipes and bag-piping, it makes me think of Scotland and it pretty much transports me there. I do, however, hearing a voice. Whether it is a choir, a solo singer or an acapella group, there’s something about a someone singing that gets to me!

What have you learned so far? As the first piper I learned that the world really is a friendly place. Maybe I’ve been lucky with my experiences and yes there are some horrible things going on in the world at the moment but in general I believe there are mostly good people out there. I’m also blown away by the fact that music really brings people together, even when it is unfamiliar I’ve been able to make the grumpiest of policemen smile by bag-piping

Bag-piping under the Northern Lights

Where to end the tour? I think the last pace I’ll play the bagpipes is Edinburgh. I have played there before but I’d like it to be my final official location and I’d like to make something of it as well!

Have you been up North? I do want indeed. There’s a lot to offer in all the Scandinavian countries. I’m pretty sure I could get some great pics as well… the Aurora Borealis or Northern Lights with the bagpipes – yes please!

Where next? I’m not sure, but I do have something in the pipeline.

If you like to follow Ross and may be listen to him bag-piping around the world, go to The First Piper

Give this music artist a guitar, and he will survive at any island. Now “Smiley” has stranded under some palm trees in the Philippines.
Read more
Adventure