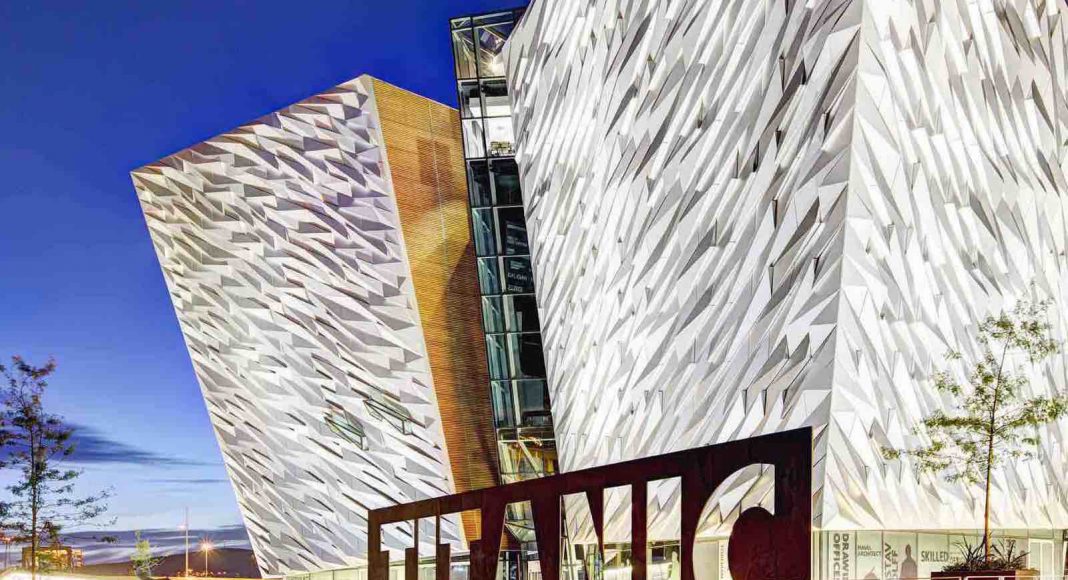 Belfast Guide – Locals happily discuss all under the sun

View and spotlight on the fascinating capital of Northern Ireland

BELFAST: This is a city of many quarters, each with its own character and story to share. The oldest quarter, and the city’s cultural heart, is the Cathedral Quarter with  cobble streets and traditional pubs. Home to some of Belfast’s iconic political wall murals. Gaeltacht Quarter is an area where Irish language and culture flourishes. This is a Belfast guide.

Holding historic Queen’s University, Ulster Museum and the Lisburn Road, the Queens Quarter has informal cafés, bars and independent shops. Titanic is so synonymous with this city that a whole neighbourhood is named in its honour. Explore Belfast’s industrial and maritime heritage in the Titanic Quarter, and witness the story of the origins and legacy of this world-famous ship.

On 17 March every year Belfast celebrates the colourful St Patrick’s Day Carnival. It means an array of floats, musicians and dancers that parade their way around the city.

DAY ONE – Check in
Belfast Guide: Malmaison is a four-star hotel with 62 rooms and suites in a converted Victorian warehouse. Original features such as carved stone gargoyles and wrought iron pillars complement the velvety, contemporary décor.
Blending Victorian grandeur with Art Deco elegance, the Merchant Hotel is an award-winning five-star property.

Adventure. Arguably the world’s most famous ocean-going vessel, RMS Titanic was built in Belfast’s historic shipyards. One hundred years on from the ship’s ill-fated maiden voyage, April 2012 saw the opening of Titanic Belfast the world’s largest Titanic-themed visitor attraction. This visitor experience includes a special effects-laden shipyard ride, underwater exploration theatre, and recreations of the ships cabins. The gallery where you watch the liner’s final moments while reading the ever-more desperate wireless signals will chill you.  The ship sank in the North Atlantic, taking more than 1,500 souls with her.

Samson & Goliath. Two huge yellow gantry cranes dominate Belfast’s skyline. Part of the Harland and Wolff shipyard, birthplace of many great ships including Titanic, these two cranes were constructed in 1969 and 1974 to service a new graving dock. Affectionately known by locals as Samson and Goliath.

Treasures. You’ll see dinosaurs, an Egyptian Mummy and modern masterpieces at Ulster Museum Northern Ireland’s treasure house of the past and present. This extensive collection of art, history and natural sciences is free to all visitors.

Another option is the spectacular Great Room Restaurant within the Merchant Hotel. Or there’s restaurateur Michael Deane’s EIPIC, a recent recipient of a coveted Michelin star for chef Danni Barry. She is only the second female chef ever in Ireland to gain a star.

Lively pub scene. Although there are excellent pubs and bars throughout the city, Belfast’s Cathedral Quarter has many characterful choices. Options include McHugh’s Bar and Restaurant which dates back to 1711. Its Main Bar is full of historical objects and memorabilia, while the Basement Bar is a live music venue hosting gigs by established artists like George Ezra as well as up-and-coming alternative bands.

Start the day with an Ulster Fry: potato and soda bread, fried eggs, sausage, bacon, black and white pudding and a tomato. The secret is to cook everything in one pan to secure all the flavour. George’s Of The Market has overlooked historic St George’s Market for more than 15 years, and serves an award-winning version using sausages made of pork and Irish dulse seaweed, a local delicacy.

Northern Ireland has witnessed many political and religious divisions over the years. An estimated 2,000 murals, considered the most famous political murals in Europe, document these troubles. Significant murals from the 1980s tend to endorse either Republican or Loyalist views, depicting sectarian events such as the Ballymurphy Massacre and the hunger strike of Bobby Sands. The current trend is for murals representing peace and tolerance. These striking examples of political street art provide an overview of Northern Ireland’s recent history. Take a 90-minute Black Taxi Tour to see what the walls of Belfast have to say.

An arts and cultural centre housed in a former church in the Gaeltacht Quarter, Cultúrlann McAdam O Fiaich celebrates and fosters Irish culture with poetry readings, traditional and contemporary Irish music, exhibitions and céili’s. Its homely café-restaurant Bia is a meeting place for Belfast’s Irish Language community, and a place to enjoy a meal in an authentic Gaelic atmosphere.

Go to prison. First opening its gates to prisoners in 1846, Crumlin Road Gaol housed murderers, suffragettes, and loyalist and republican prisoners for 150 years. It has witnessed births, deaths and marriages and has been home to executions, escapes, riots and hunger strikes. The Gaol reopened in 2012 as a major visitor attraction. The 70-minute tour pays a visit to the condemned man’s cell, the execution cell, and the underground tunnel connecting the gaol to Crumlin Road Courthouse.

All tastes and budgets. Carnivores will devour the signature Beef Shin Burger at The Barking Dog but there are excellent fish and vegetarian options too. With exposed brick walls and scrubbed wooden tables, this informal eatery is ideal for a full meal or a quick bite, while the upstairs cocktail lounge serves drinks and nibbles.

One of Belfast’s favourite restaurants, Mourne Seafood Bar specialises in fresh local seafood at an affordable price in rustic surroundings. This winning formula means it’s very popular, so reservations are essential for dinner.

Getting here. Belfast is situated on the east coast of Northern Ireland. It’s served by flights into Belfast International Airport and George Best Belfast City Airport. Scheduled flights operate from most major British airports, as well as from many major European cities. There are also ferry connections with England and Scotland.

Local Tip. If you are wondering what clothes to bring, the answer is all of them. When it does rain, just drop into nearest pub, and the sun will be out by the time you finish your pint. I can assure the locals will happily discuss anything under the sun with tourists. But if someone mentions religion and you don’t want staying onto the touchy subject in what is still a divided society, just say: “I’m an atheist, thank God”. Then buy another drink.

Sure, there is far more to know about Belfast

Meaty Sunday. We found the place to go if you want an excellent home cooked roast – on a sunny Sunday in Spain
Read more
Europe

Personal trainer, yoga, cross training with a sea view. No better place to get fit and healthy on a holiday. Get our Review.
Read more
City Break

There is a comedian in all Brits and Stand-up comedy on every corner. The hilarious part of London expecting you to laugh and have a bit of fun.
Read more

Personal trainer, yoga, cross training with a sea view. No better place to get fit and healthy on a holiday. Get our Review.
Read more

There is a comedian in all Brits and Stand-up comedy on every corner. The hilarious part of London expecting you to laugh and have a bit of fun.
Read more