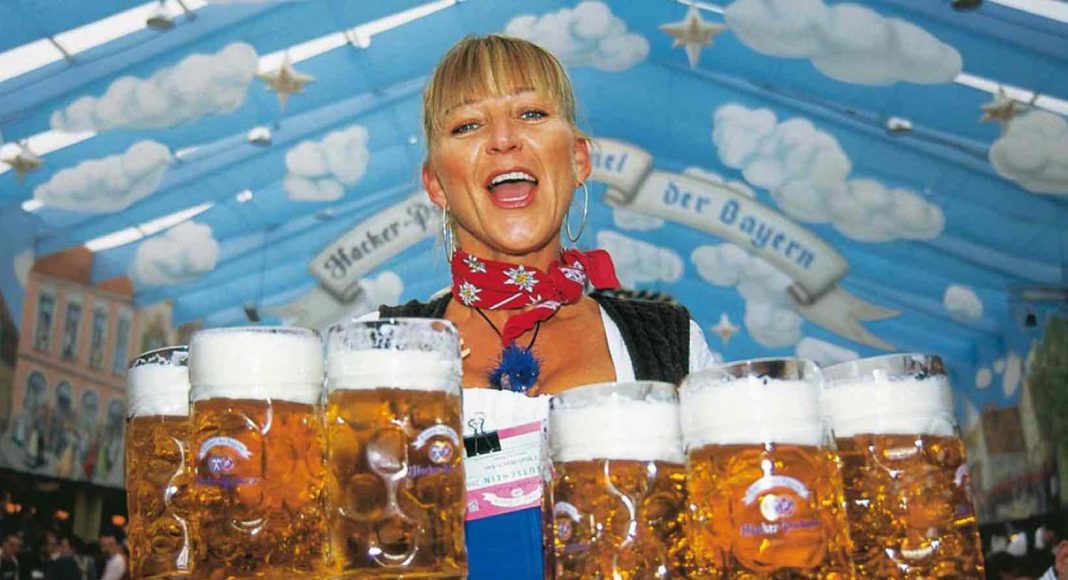 Seven million litres beer to be served at Oktoberfest in Munich

MUNICH: Folk festival, beer festival, drinking, the oompah-pah music and songs, people dressed in traditional Bavarian gear. Which means men in Lederhosen and women in Dirndl. Add colorful parades, celebrities and you are in the middle of Munich’s Oktoberfest. If you want to catch the official opening ceremonies, the Schottenhamel tent is the place to be  when the Mayor of Munich has the honour of tapping the first keg of Oktoberfest beer. Then all visitors are allowed to quench their thirst and the beer-party is on – actually from end of September. 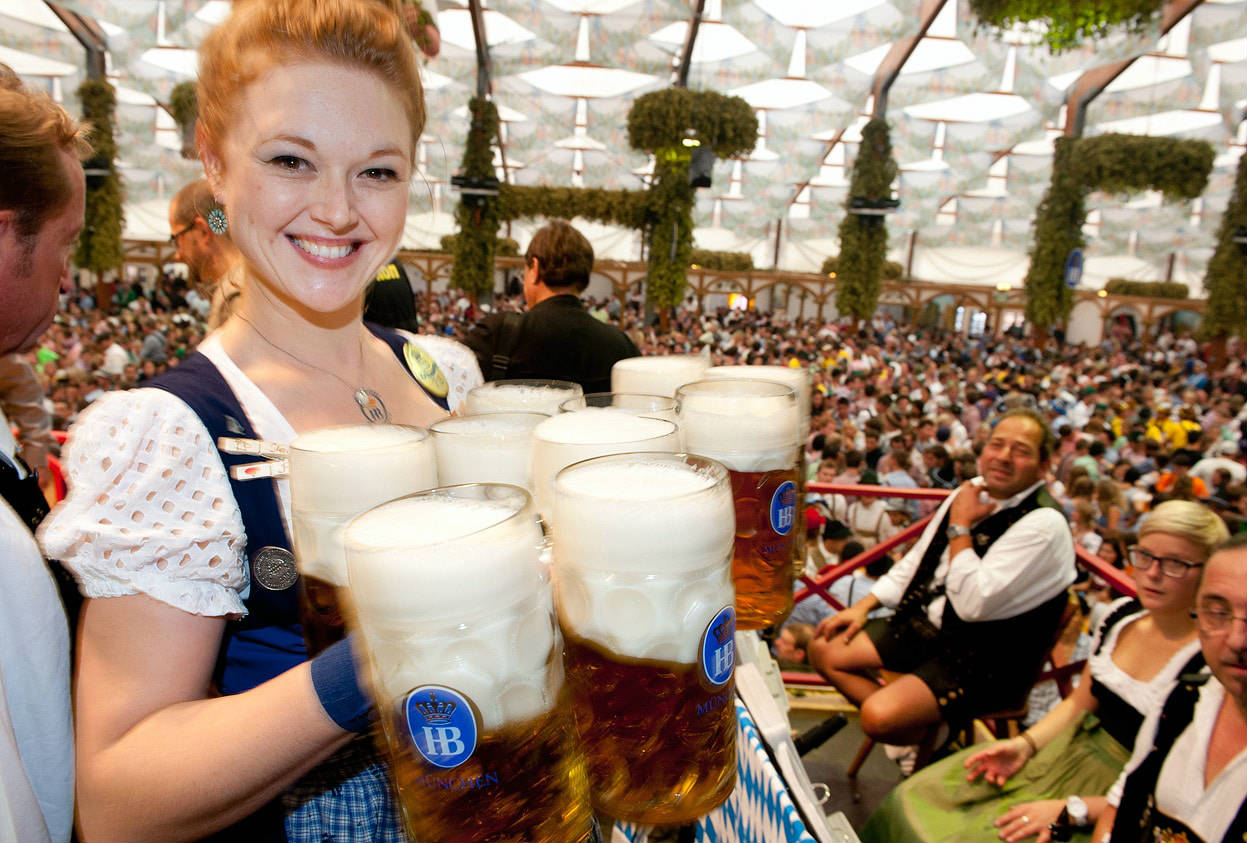 The Oktoberfest claim to be the world’s largest folk fest, a celebration of beer, beer and more beer. The big party attract around six million visitors who normally consume almost seven million litres of beer. Add thousands of grilled sausages, half a million of chicken and lot more during the festival in a field just outside Munich’s city centre.

Two months before the Oktoberfest opens, 15 large tents are rigged to welcome beer and party lovers from all over the world. Oktoberfest is a huge crowd-puller and as a rule accommodation and transport have to be booked well in advance. That said, it is possible to plan a trip close to the event. For the purist, a true Bavarian wears only lederhosen made from the Bavarian deer and stitched and embroidered by a local tailor. Regardless the traditions, this party is for everyone, whether you are young or old, German or arriving from another country, you are always warmly welcomed. The second week is called “The Italian Week”, as many Italians attend the festival.

The original Oktoberfest in 1810 was held in honour of the wedding between Crown Prince Ludwig of Bavaria and Princess Therese of Saxon-Hildburghausen. For five days, the people of Munich were invited to eat, drink and be merry. Such a good time was held the following year, and next and the next for more than 200 years. Well, there has been the occasional pause, usually at times of war.

The local breweries have their own tents that can serve up to 10,000 visitors along wooden tables and benches. However, if you don’t have a reservation, be there before noon in order to get your seats. The main party is held at a place named in honour of Ludwig’s bride, Thereseienwiese, a short ride from the centre of Munich. The opening day is marked by a colorful parade of carriages and people in a variety of costumes through the streets of Munich. If you want to join in, there are several shops selling such gear. 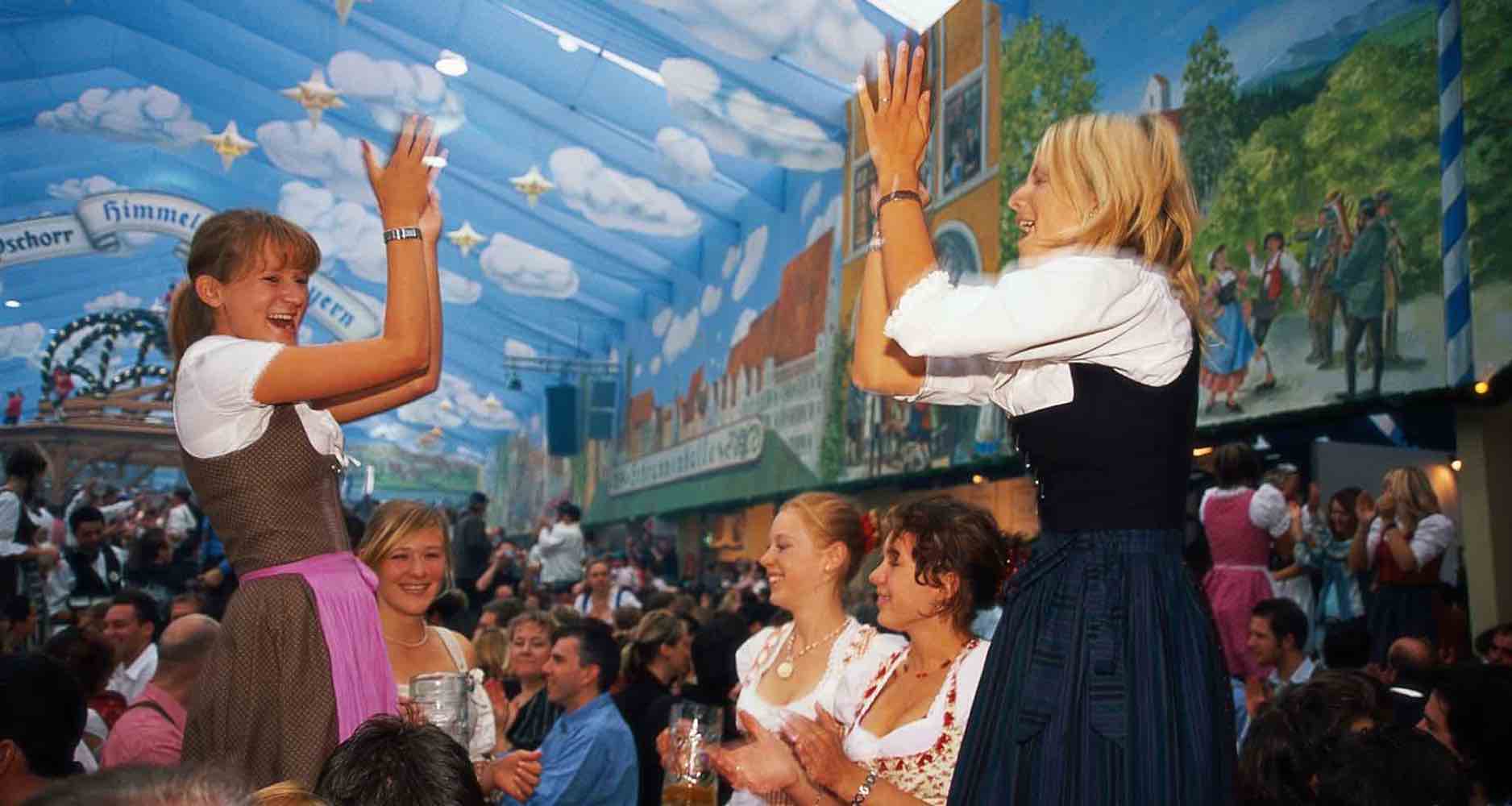 Beer is served in one-liter glasses and comes from Munich breweries such as Augustiner Brau, Staatliches Hofbräu and Löwenbräu. There are no half measures and the cost for one liter has risen above 10 Euros. Typically food is roasted chicken, Bratwurst, knuckles of port, smoked fish and lots of gingerbread. If you don’t drink beer, this party is not the ideal place for you. That said, there is a wine tent (weinzelt) serving wine and champagne. Believe it or not, the Oktoberfest is also aimed at families with some kid-friendly tents with fun fair, the Olympia Loop and other fun and excitements. Don’t forget Munich itself has a lot of attractions and shopping areas.

Seven million liters of beer expected to be served and one of the records belongs to Anita. She carry 19 glasses, five in each hand and nine placed on top, a total of 45 kilos. Anitra  walked 60 metres without spilling a single drop. Bavarian or Bayerisch is a language all unto itself. But if you learn “Oans-zwoa-drei-gsuffa”, which means One, two, three, bottoms up! – and you might feel like a local at Oktoberfest Munich.

Not bad to start: Drink local in Europe