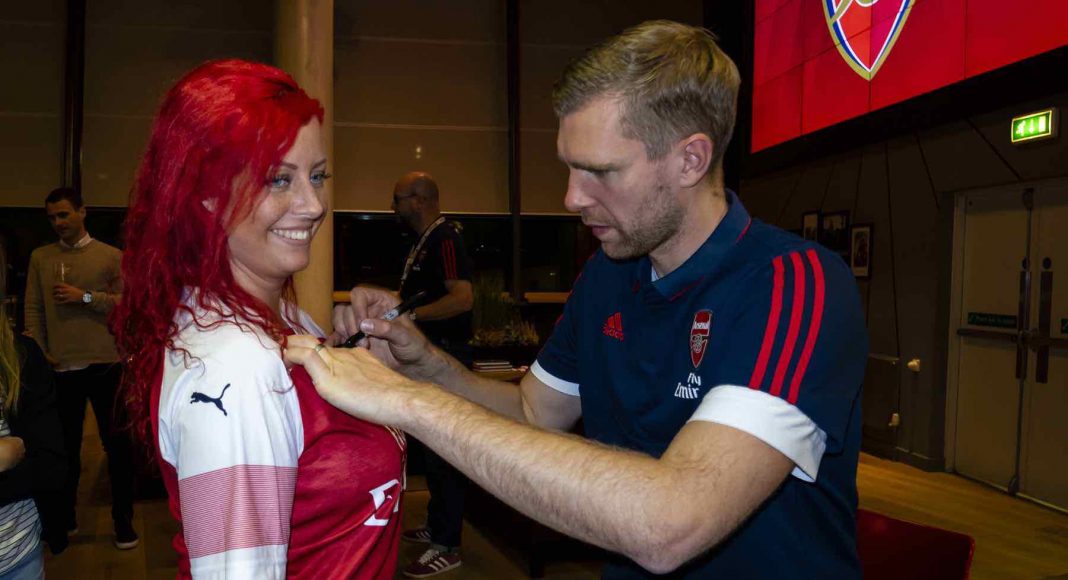 Passion for Arsenal lasts longer than any marriage

Relationship, Emotion and Passion for Arsenal in London

Love and strong sense of affection. Add club feeling, obsession and passion that never ends – just ask fans of The Gunners from across Europe.

LONDON: Drop into The Tollington Arms in North London´s Hornsey Road if you like to meet Arsenal fans from around Europe. The board of “Arsenal Norway” assembled here ahead of their annual meeting. Here was shop assistant Sondre from Stavanger, machine operator Ole Kristian from Lørenskog, municipal employee Truls from Sarpsborg, Logistics-Ronny from Bergen, IT-Jostein from Voss and the eminent photographer Kjell Eivind from Moss. They are all among 700 Norwegian women and men having one thing in common with Queen Elizabeth II. It´s about passion for everyone. They are all fans of Arsenal Football Club located at Emirates Stadium, Islington, North London.

Stand by heroes at Emirates

“Our relationship with Arsenal can be compared to love and passion.  We stand by our heroes in good and bad days”, Roar Myrvang reveals on behalf of the fan club “Arsenal Norway”. He combines job as project manager at a theatre in Oslo with being a passionate chairman of the fan-club founded by two youngsters 40 years ago. While annual meetings in Oslo barely collected ten attendances more than 160 made exclusive trip from Norway to the annual meeting at Emirates Stadium.

Shopping and musicals in London

Football fans from all over Europe who spend holidays and weekends in London are definitely not like all tourists. Firstly, everyone has a crush on the club and is happy to gather at pubs, cafes and restaurants in the Islington area. Many visit London 4-6 times a season and combine matches with shopping, museums and visiting musicals.
“We tend to say that we change partners, but never replace Arsenal as our mate of life”, says another member of the fan-club

Arsenal for a reason

A swift survey reveals some weird and wonderful reasons behind choosing a favourite club. Ole Kristian became Arsenal fan when in 1971 he listens to a radio report in Norway when Arsenal secured The Double. Today, Ole is one of the fan club’s most popular figures, as head of match tickets to members.

Truls became a fan after receiving Arsenal scarf as a gift in the mid 70s, while Morten from Oslo was saved in 1998 after watching a goal by former star player Patrick Vieira.
Ronny Madsen from Bergen obviously supports home city´s top club Brann, but most of all he is in love with Arsenal. “I grew up with my father as Tottenham supporter – that’s why I chose nearby Arsenal as my ultimate revolt”, Ronny says and reminds us of the famous song; “Raise up if you hate Tottenham”.

Celebs with passion for Arsenal

Arsenal was founded in 1886, also named “The Gunners” and supporters are called “Gooner”. Kings, queens and celebrities all have Arsenal as their favourite, also people such as Fidel Castro, Osama Bin Laden and train robber Ronald Biggs. Prince Harry is a “Gooner” as are Mick Jagger, Pierse Morgan, Jay-Z, Dido, Mo Farah, Demi Moore, Jackie Chan, Roger Daltrey, Johnny Rotten, Cat Stevens, Diego Maradona and Queen Elizabeth II plus thousands of members in fan clubs all over Europe. Everyone shouts: “Come on, you Gunners!” or sing “We’re by far the greatest team. The world has ever seen”

Among 7,000 members in “Arsenal Norway” many are females, but after 40 years they have not yet managed to get a single woman on the board.
“For long we struggled to get women in our board, but so far we haven´t succeeded. However, we are not giving up”, chairman Myrvang says – and reminds new and old members that optimism is a wonderful trait if you like to support the club with whole heart or become a member of “Arsenal Norway” – they all expect and dream to wake up with Arsenal on top of Premier League.

More about Arsenal: Read our guide to pubs near Emirates Stadium