Speakers Corner: Pick up a fight of free speech

Sunday morning, anyone can meet up and speak out about anything

LONDON: Politics, politics and even more politics. Add something about staying proud British, Brexit, fake news, food and arguments about anything, in particular about religion. Here is what happened a Sunday at Speakers` Corner in London. This traditional public meeting at the north-east corner of Hyde Park near Marble Arch grew out of a revolt in 1866 to complain about the lack of vote for working men.

Attraction. After 152 years, Speakers’ Corner still is one of London´s most eccentric attractions. Sunday morning, anyone can meet up and speak out about anything, from moral standard to lack of trust in politicians or any subject, as long as the police consider speeches lawful. Here is no immunity from the law, nor are any subject proscribed. However, in practice the police tend to be tolerant and intervene only when they receive a complaint or if they hear profanity. Plenty of police was in the park and they didn´t intervene to any speech.

This is grassroots democracy

There is no invitation or qualification, it’s an open air forum as a grassroots democracy at work, this is a place that exemplifies freedom of speech. Get to the park early Sunday, and when on a stepladder you can expect a debate as ferocious, nasty and charmy as Liverpool versus Real Madrid in the Champion League. 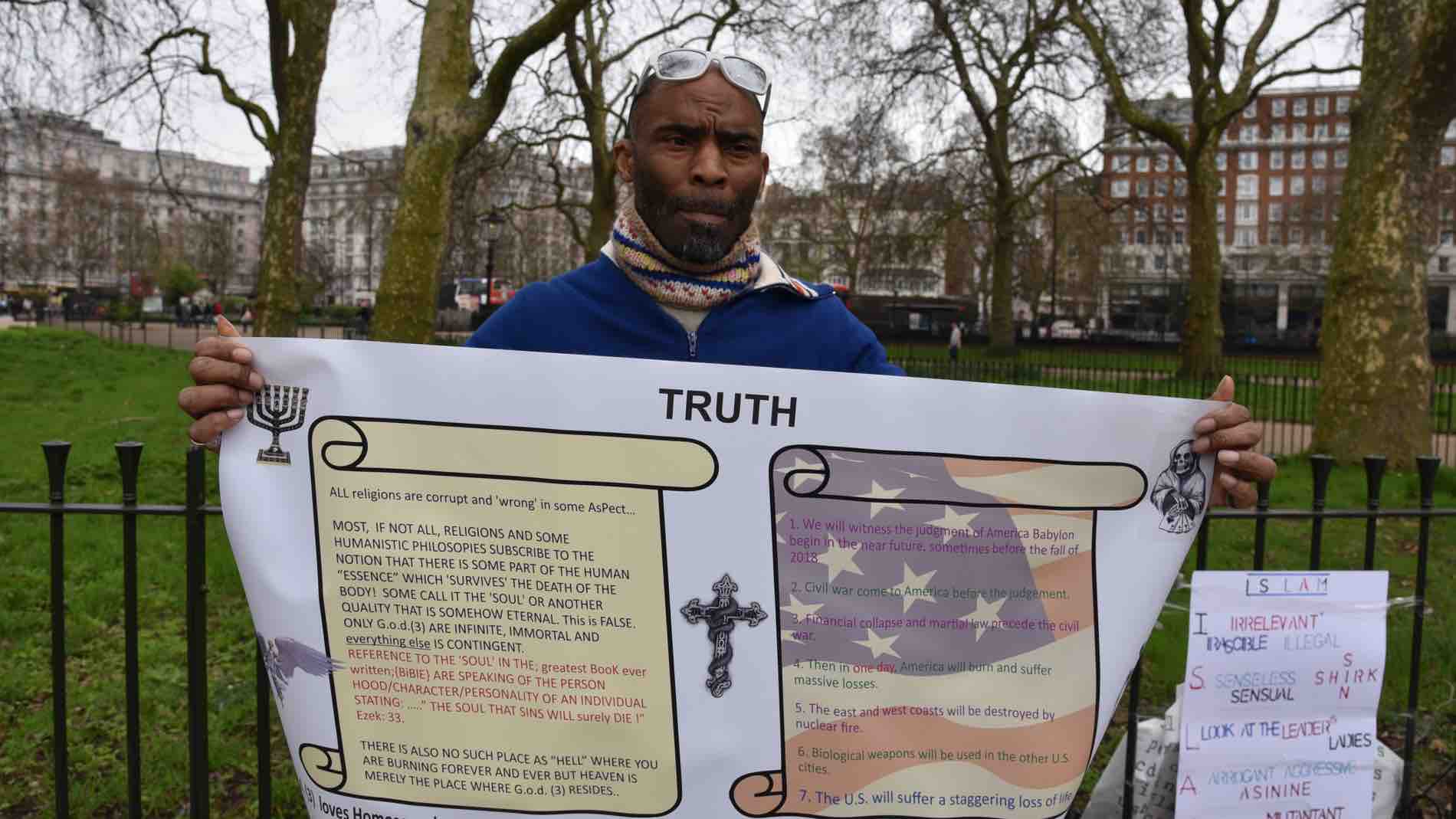 Free Julian Assange. It is easy to get into a heathen argument at Speakers` Corner. At my visit I met some anti-immigration speakers, and the American Ciarone. He was a regular here arguing to free Julian Assange five years after he walked into the Ecuadorian Embassy in London, asking for asylum. Several Muslim speakers, some in intense discussions with Christians and Jews, ended in a noisy religious debate, hooked up in insults.
“I’ve been heckling for a year, it makes a show for the crowd”, one man told. Only one woman was among the speakers and plenty of nationalism and fundamentalism. It mirrors how the world changes.

President of The Philippines

Next the tube station I met a horde of real protesters. The Philippine community demonstrated against the International Criminal Court in den Haag. It´s about a case  president Rodrigo Duterte and 11 other Philippine officials accused of mass murder and crimes against humanity.
“Our president is not a murder, he leads a campaign against drug dealers and criminals back home. The court case is clearly to undermine the duly constituted government of the Philippines”, a protester told.

This is historic tradition

People from all walks of life came here listen to speeches about anything and everything, some stepped up to heckle. This bastion of free public speech is absolutely one of the most interesting theatrical activities this city has to offer. A historical tradition on a Sunday. Every Sunday.

More about London: The Smell of Dark Coffee
Travel tips London: The Parliament is open to visitors year round, Monday to Saturday

Join the locals and realize what they do best; Eat, drink and enjoy! This is our special seafood guide to 10 of the best beach restaurants in Malaga.
Read more
Eat Local