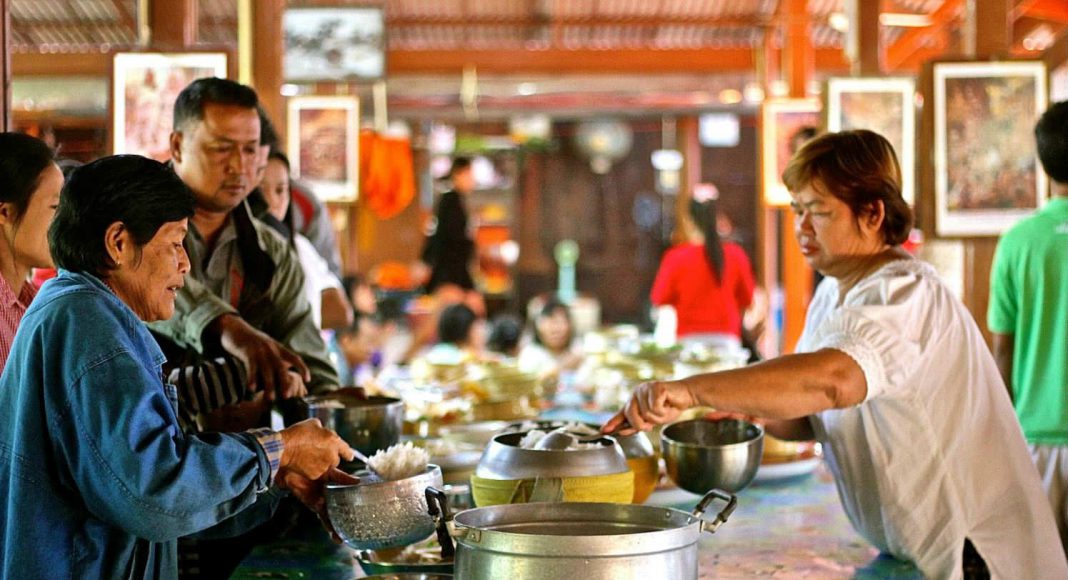 A Thai Village welcome for a Happy New Year

THAILAND: I don’t know about you, but the first morning of a New Year I am usually found between my sheets. Sleeping. Perhaps also feeling the effects of certain liquid treats. The first of January does not proceed to be one of my most productive days. I’ve felt that to be quite alright. Well, it used to like this. This year, it was New Year celebration in Thailand.

I was therefore much surprised to find myself spending this very morning kneeling on a temple floor. Just as the sun was peering over the lush jungle horizon of a small Thai village. The image could not have differed more from those of previous January 1sts. Around me were dozens of Thai families, mainly women, kneeling before a company of two orange-clad Buddhist monks, sat on a decorated plateau in front of us. Small children and animals ranging from kittens to roaches in kind were crawling around our feet. Most tempted by the enormous amounts of food brought to the temple. As my hands touched in the traditional wai greeting in front of my chest, I could not help but laugh at the thought of what my friends were doing with their first morning back home.

As this thought crossed my mind, I felt a tap on my shoulder. I turned to find an older woman smiling a toothless but incredibly charming smile, holding up what looked like her finest silver chalice. She pointed at my shoulder.

“Khao,” she said. This, I knew from experience, means “white” and should in Thai culture be received as a great compliment.

“Unfortunately, yeah. But thanks!” I tried, offering a personalised wai of gratitude.
“Very white,” she manifested.
“Yeah, indeed,” I tried yet again.

She smiled even wider and nodded at me to take her bowl. Inside were a few spoonfuls of boiled rice. She took my hand just as the whole group of praying families rose in one simultaneous movement, and we all approached a large table set with food and two large bowls. Showing me the rite, the women all scooped rice into the large bowls from their smaller ones. Then back and reassumed their positions on the wooden panel floor.

Though I may have been tired and also slightly out of place as the only western woman in the group (or, in fact, the village), I felt a profound serenity in spending my first moments of a new year in this most unanticipated setting. I may not have understood the holy prayers read out by the monks, but I was assured my own prayers and wishes for a prosperous year would not go unheard for such a simple reason. After all, I was told, I had shown up in all my white confusion.

For some reason, that sole act made my whole day. Perhaps – if the village women are right – it will have made my whole year.
The toothless woman grinned again.
“Now, good luck all year,” she said.
One can only hope. And pray to Buddha, in all one’s Western whiteness. If the new year brings the goods, I know where I’ll be the next first January morning.
Pictures by  Lykke Feliz Lindén

Great fun is part of the trip. Malaga weekend breaks is music in the streets, parades, festival and carnival with humour and satire when spring returns.
Read more
Inspiration

Flamenco and Late lunch, Siesta and night life. Holy week and throwing tomatoes at anything that moves. Plenty of fiestas and Spanish traditions.
Read more
Asia