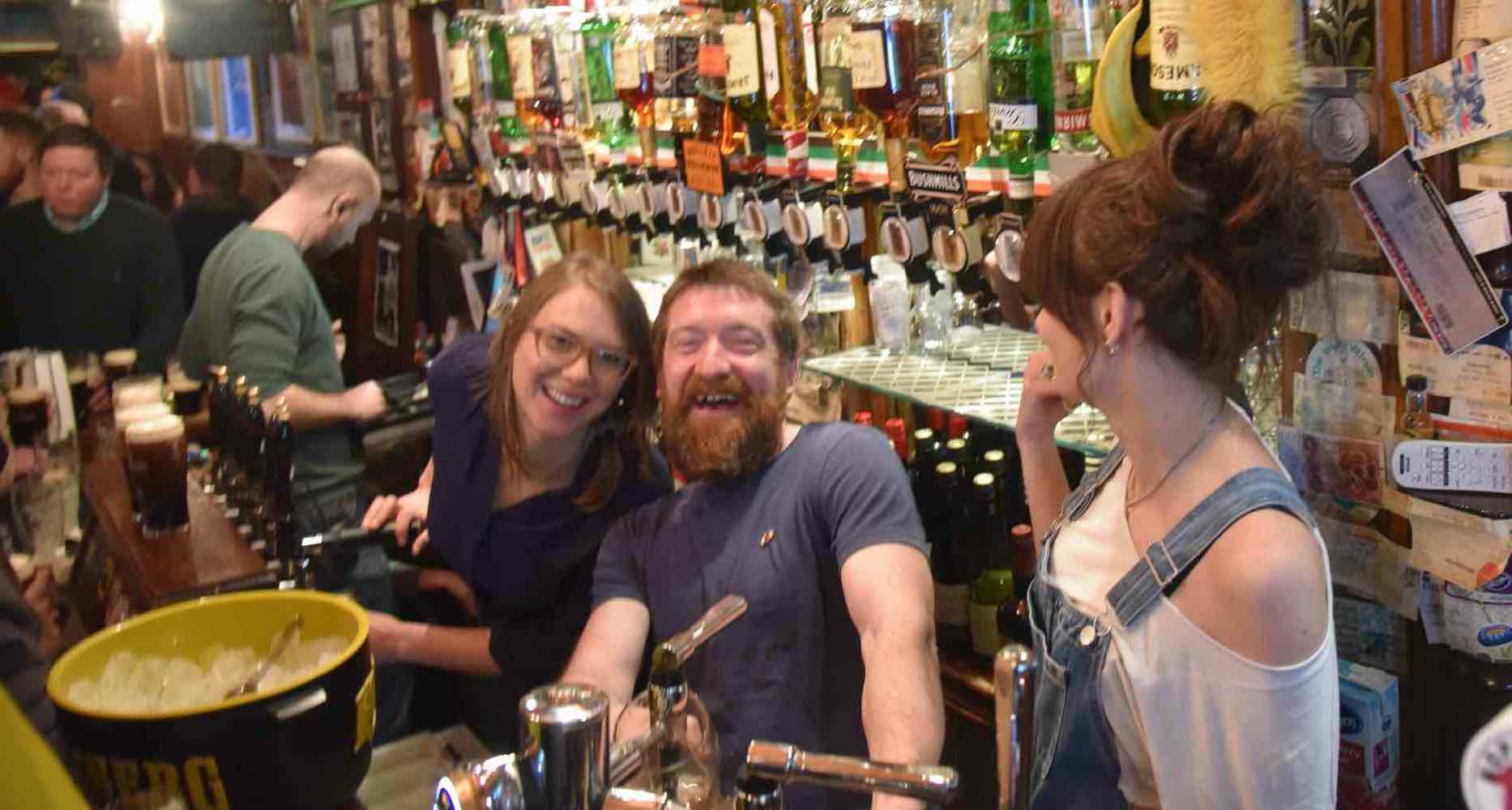 The oldest. The first Irish. Best Irish. They are old but still among the best pubs in London. Try a big night out

FROM PUB TO PUB: Spend an afternoon soaking up the atmosphere while share a pint or three. We suggest to start at Blackfriars, just across the road from the first pub stop on this historic pub crawl in London.

LONDON GUIDE: WALK IN THE PARKS

This one is hard to miss. Black Friar was originally built circa 1875. The interior, dating from Art Nouveau from 1905 onwards, makes this pub so remarkable and also one of the best pubs in central London. At that time, when austerity was replacing the glamour, exuberant design of this kind was very rare. Secrets of this pub are to be found in the rear room – preserved decorative reliefs, mosaic ceilings and copper friezes by sculptural artist Henry Poole. Illustrating the life of monks in ornate detail, along with motto: “Silence is golden”. Visit nearby St Paul´s Cathedral to enjoy more of Pool´s sculptural work.
The beer and ale list is better than ever and a food menue. Plenty of outdoor seating.
Address: 174 Queen Victoria Street, London EC4V 4EG
Getting there: Blackfriars (National Rail, Circle, District Lines). 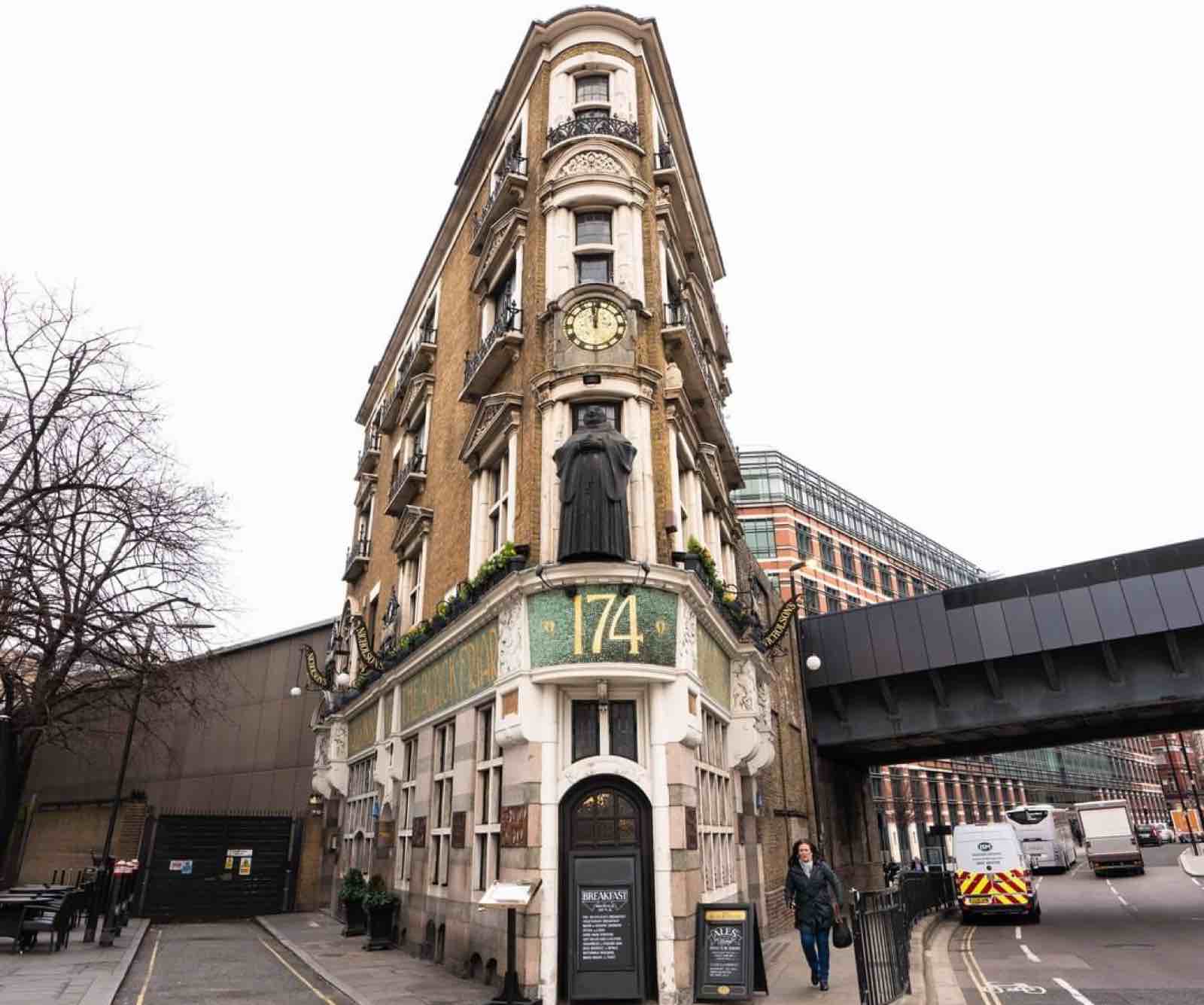 In the heart of London´s most popular foodie market and just a stone´s throw away from London Bridge. You guessed it, this is Borough Market´s top pub offering the finest cask conditioned real ales, craft and draught beers. Or ask one of the bubbly team to stir you away with a good mix of Negroni, classic G&T, or a glass of fizz. They serve homemade sausage rolls and some pub classics. A must visit on any pub crawl.
Address: Wheatsheaf Pub, 6 Stoney Street, Borough, London SE1 9AA

It´s a long way from Tipperary to Fleet Street in London, and it´s a long, long way from accurate history. The Tipperary claims to be the first Irish pub outside Ireland and the first to sell Guinness in England. And to be one of the oldest pub in London.
A boast backed by the words on its exterior board: that it was acquired and refitted by J.G. Mooney & Co. of Dublin in 1895. The well-worn remains of the Mooney name appear on a slate at the entrance, and shamrocks are found in the mosaic flooring.
Starting life as the Boar’s Head, the pub was renamed the Tipperary in 1918 to commemorate the Great War song. Must be perfect to be on St Patricks Day.
Address: 66 Fleet Street, Holborn, London EC4Y 1HT

Ever wondered where The Sugarloaf got its name? The story dates back to the 17th century where the area produced sugar in sugar refineries. Although these refineries got demolished for the construction of the Southwark Bridge, our pub still stands as a homage to this. The sugarloaf was the traditional form in which refined sugar was produced and sold until the late 19th century – tall with a rounded top from which lumps could be broken off with sugar nips. Visit The Sugarloaf and step back in history!

This is one of many rare gems in the Nicholson´s collection of iconic British pubs. Busy after work, City custom but not the posher kind. Grade II listed.
Address: 65 Cannon Street, London EC4N 5AA

So great is Kentish Town’s love of the Pineapple that when the pub was threatened with redevelopment into flats, locals started a campaign to save it – and got the place listed by English Heritage in just eight days.
This backstreet boozer dates back to the mid-nineteenth century, and you can feel the history in the weathered wood of the joyously unmodernised main bar.

“The Pineapple is an old fruit, and can get a bit grotty without a regular spruce-up. It’s the small things, candles, fairy lights in the garden, water fountains, biodegradable straws and, well, keeping the toilets clean”, Poppy Wheldon says.

The Pineapple pub proved it´s like a sharp old fruit – just gets better and better. In addition, we´ve all heard the common myth that cats have nine lives. The Pineapple´s future should be secured as the pub has not less than two cats.
Address: The Pineapple, Leverton Street 51, London NW5
Facebook: thepineapplepub
Travel: Northern Line and National Rail to Kentish Town.

The Cockpit for gamblers

This is a hidden gem nestled in a backstreet near St Paul´s Cathedral with a diverse mix of clientele. Cockpit was built in the 1840s and became famed for its cockfights. Look up and you’ll see the high ceiling. The balcony is where Londoners would have bidden for blood and gambled while the cocks fought for their life. Breathe in, and you could imagine the flurry of feathers and screams of excitement.
Address: 7 St Andrew’s Hill, London EC4V 5BY

The Flask in Hampstead

Many pubs claim to be very old. In fact, the vast majority of London´s really old pubs were completely rebuild in Victorian and Edwardian times. The Flask in Hampstead was renovated in the 1760s and again in 1910. The Flask is a Hampstead institution, loved by locals. This is an historic pub with real charm. Claudia, Francesco and the team will welcome you for food and ale.
Address: 14 Flask Walk, London NW3 1H

For a pub crawl, this is another old pub with the name Wheatsheaf – and where the performance happens. It´s a great little pub and the staff is great. From the 1930s it became  one of the celebrated bohemian London pubs. Guests like Georgie Orwell drank in the main bar and where poet and writer Dylan Thomas met his wife. These days, the pub always seems oddly and pleasantly – with a large section of stained glass completing the picture. Give it a try.
Address: 25 Rathbone Place, Fitzrovia, London, W1T 1DG

The pub is a great British institution and as you would expect London has a number watering holes that have been about for centuries.
There’s few better experience than having a drink in one of the many historical pubs dotted throughout London. No matter which part of town you’re staying in, or what kind of drink you enjoy, there’s usually a great local boozer just around the corner.
With over 3,000 pubs in London, London Guided Walks have handpicked the best of London’s historic pubs for a leisurely stroll through Covent Garden and Wapping.
Come along on Historic London Pub Tours. Explore some of the best and most interesting historical London pubs.

Auld Shillelagh is authentic and should be on the list for a pub crawl. If you are looking for something true Irish in London, I will lead you to the high street of Stoke Newington, north of the capital. Inside the tiny red and black front with frosty windows, you will find Auld Shillelagh. The Irish pub and probably the warmest welcome in this part of London.
In written; “The most authentic Irish pub outside of Ireland”, according to the Irish Times.
The slogan written up high in Celtic lettering says it all: “Off the lash and on the lash”. What on earth it means, I fully agree.

Auld Shillelagh Address: 195 Stoke Newington Church Street N16. Open from 11am until late. Getting there: Dalston Kingsland Overground or Bus 393 from Camden.
More about our visit to Auld Shillelagh

In Nevada they believe it´s a city God would create if he had money. Certainly, Vegas impress, and surprise. This is the best of Las Vegas
Read more
England

All research reveals the more stressed we become, the dumber we get. It´s high time to meet Mr Slow-Guru and learn why slow down.
Read more

Tavira is a former trading port turning fishing town, with character and authentic in Portugal. A new favourite east of Algarve.
Read more