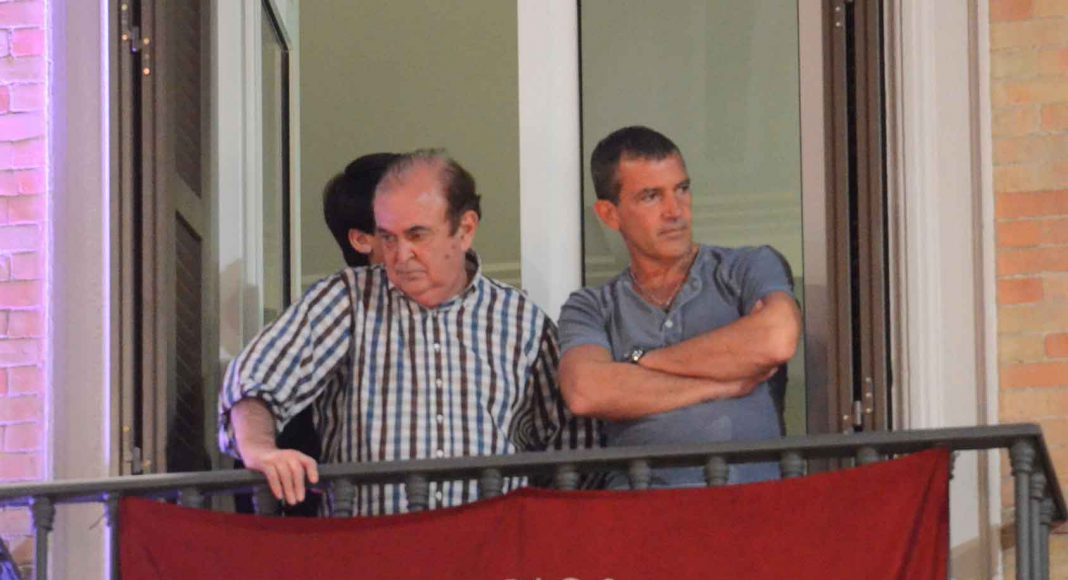 It is possible to hire seats on the main avenue

Every year Banderas spend the Holy Easter Week in Malaga

MALAGA, SPAIN: For many, Holy Week turns out to be the religious highlight of the year. For others it is a way to get together for a meal of Tapas and local wine at an important cultural event. And for thousands it’s all about struggling to get into the city centre where people move like herrings in a glass. With the exception of the Spanish Hollywood star Antonio Banderols – and some lucky international reporters.

From our balconies at Larios Hotel in Malaga’s main street we primarily watched the procession. But we also had an eye on Banderas at the balcony next to ours. Wondering where his American wife Melanie Griffith was hiding. Later the couple divorced. 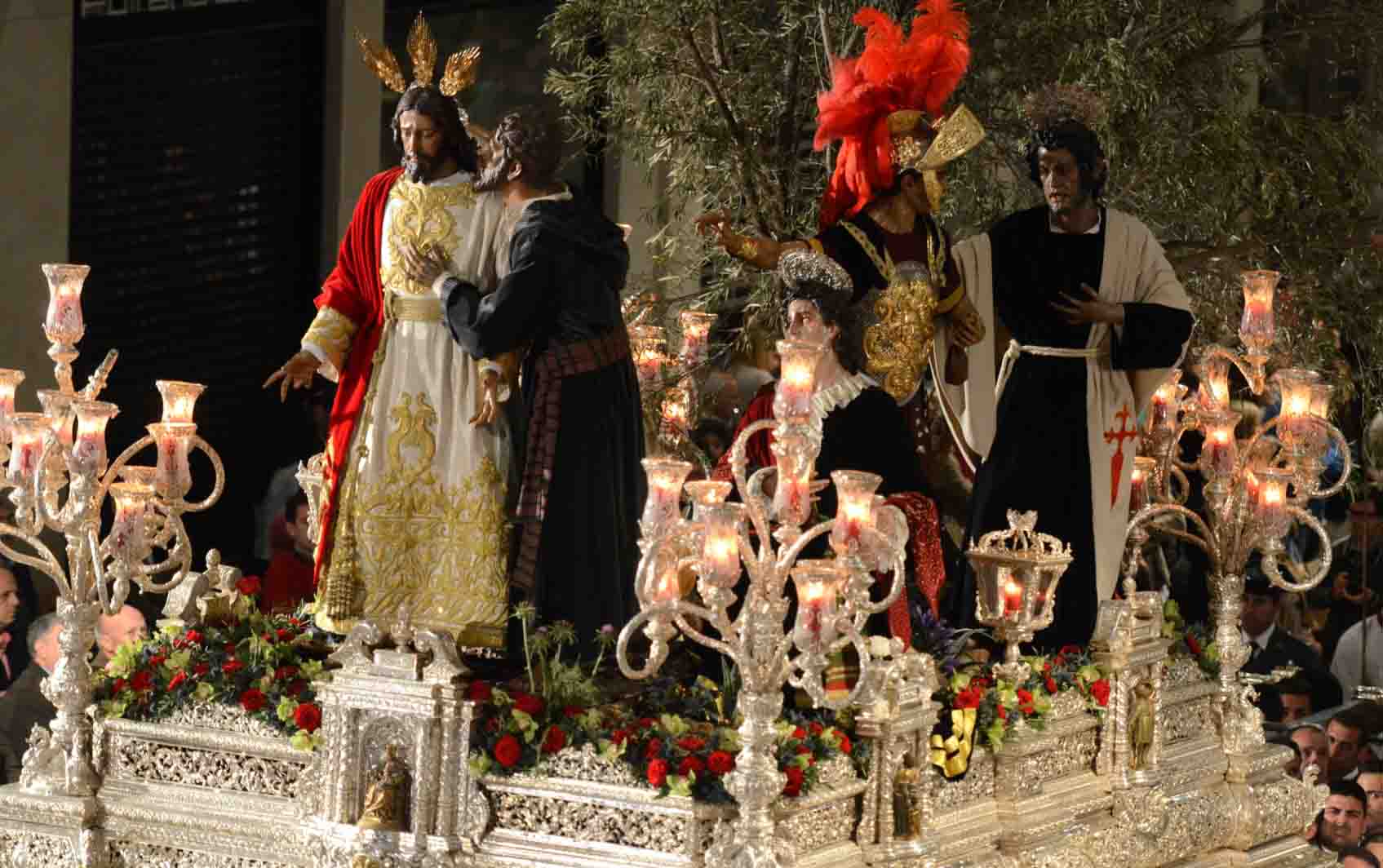 Every year Antonio Banderas spend the Holy Easter Week of Semana Santa in Malaga. Always watching the processions, the glorious floats with religious sculptures moving slowly on the streets in the historic part of the city – night after night from the same balcony. But Banderas also takes part in the celebrations.

Holy Week is also designated as a fiesta for the interest of international tourists. It begins with the processions on Palm Sunday and ends one week later, on Easter Sunday. During one week thousands of visitors from across Spain and abroad come to follow the parade. If you plan to visit Malaga for next year’s celebrations, it is possible to hire seats on the main avenue, but this must be arranged far in advance. 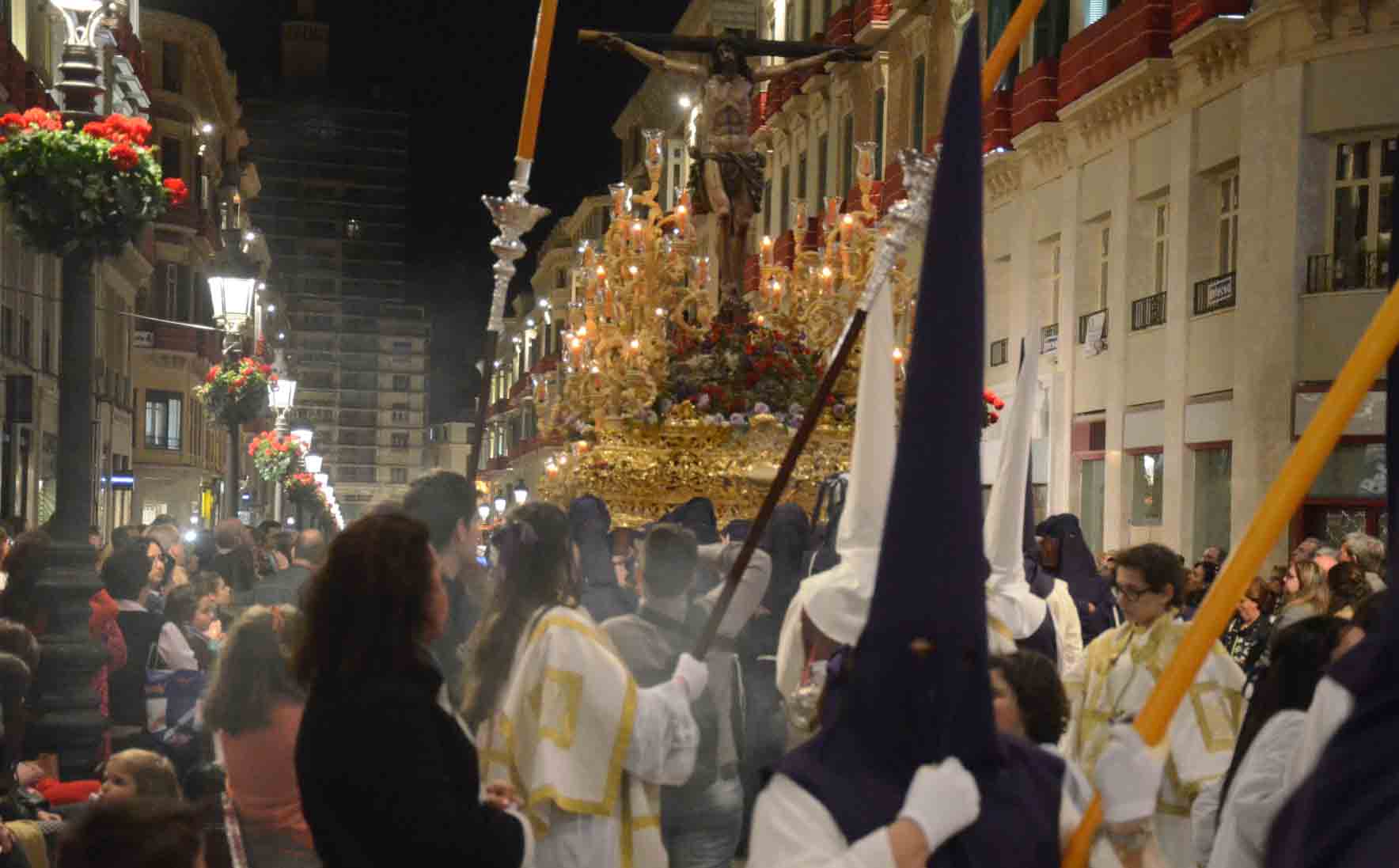 During the Easter the streets of Malaga are filled with medieval robed and hooded figures, processing slowly behind swaying religious statues, accompanied by the deep dull sound of drums and crying trumpets. The ancient celebration of Christ’s last days reveals a mystical side of this lively city. Nearly 50 brotherhoods takes part, each with their own Virgin Mary and Jesus statues on decorated floats on the streets in candlelit processions that draw thousands of spectators. For a whole week, people take to the streets to be wrapped by the festive atmosphere.

Tears and Favours. Every year Malaga-born Antonio Banderas makes an effort to spend Semana Santa in the city where he leads a procession with the Spanish name Virgin de las Lagrimas y Favores, Virgin of Tears and Favours. He used to have a special permission to leave any film set to join his brotherhood and his close ties to the church where he and his brother were baptised. He is an active member of the church in Malaga. 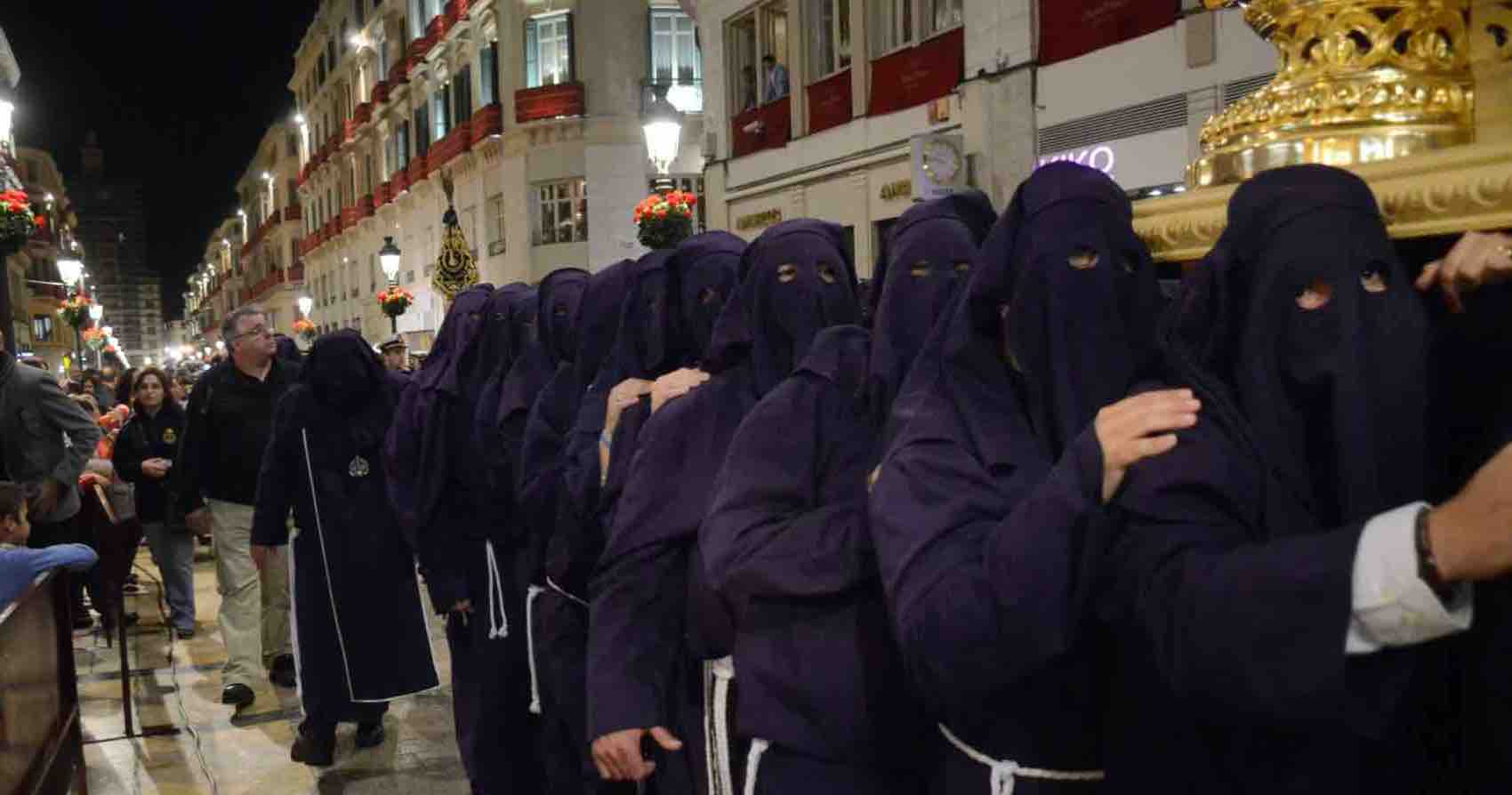 Hiding identity. “Wearing the hood gives me a certain freedom. I’m on the same level as everyone else, exactly the same. That’s what the hood is all about – hiding your identity and going from being an individual, to being a part of a collective”, Banderas said after watching other processions.

While Antonio is passionate about his faith and traditions, the streets of Malaga fell silent as the holy business gets underway for a whole week in sober revival of Christ’s last days – and men of Malaga’s brotherhood drag their heavy floats through the city. 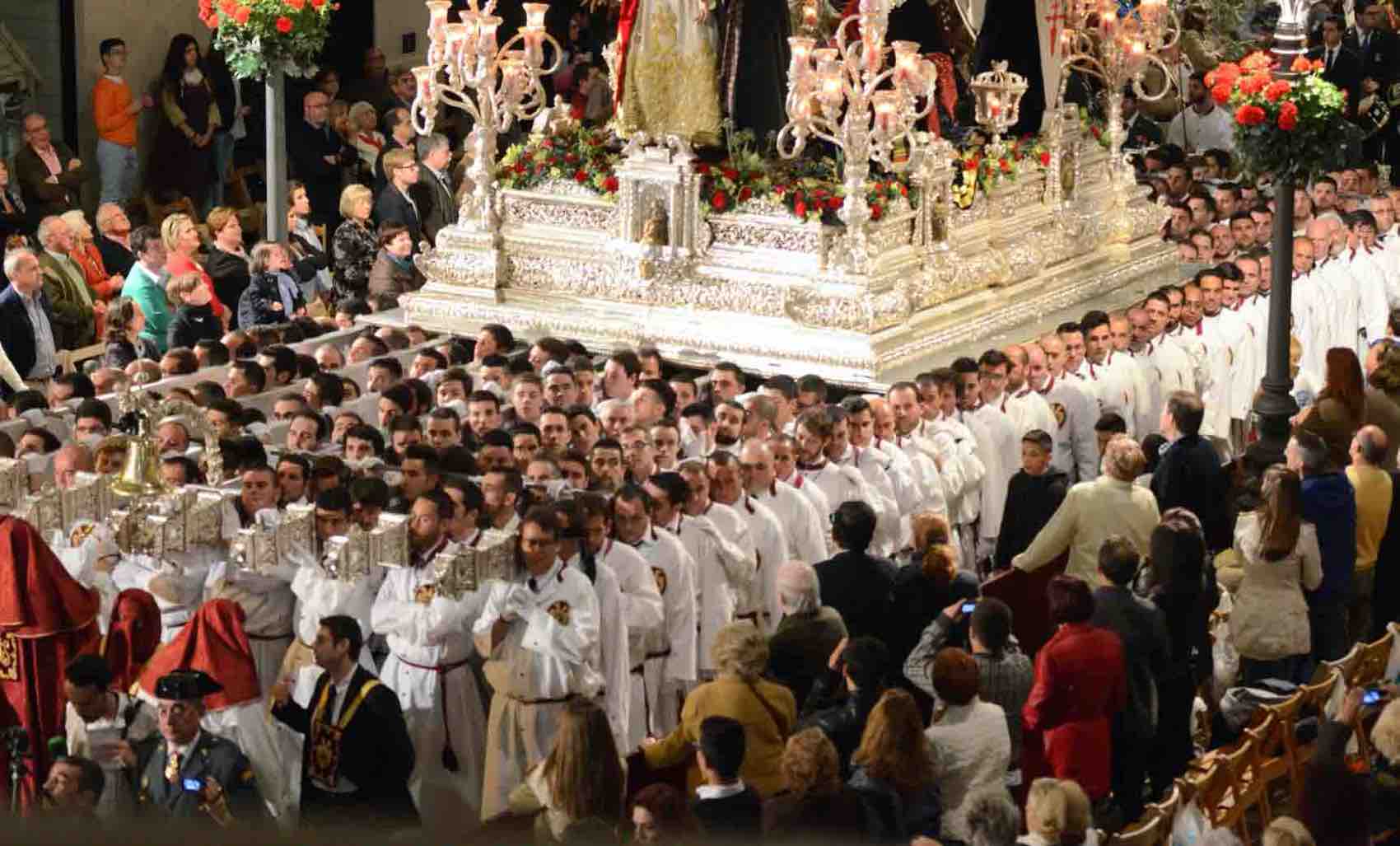 Every year one brotherhood has the divine right to demand the freedom of one prisoner. The tradition goes back to Easter 1759. Last year the final parade was more than ever moving when the brotherhoods join with thousands of penitents. One of those penitents was a 52-year old father of two, known only by initials. Until Semana Santa took place, he was serving three years for drug dealing. Out of the blue the unthinkable happened; He was pardoned by “God”! Surly, not by Antonio Banderas.