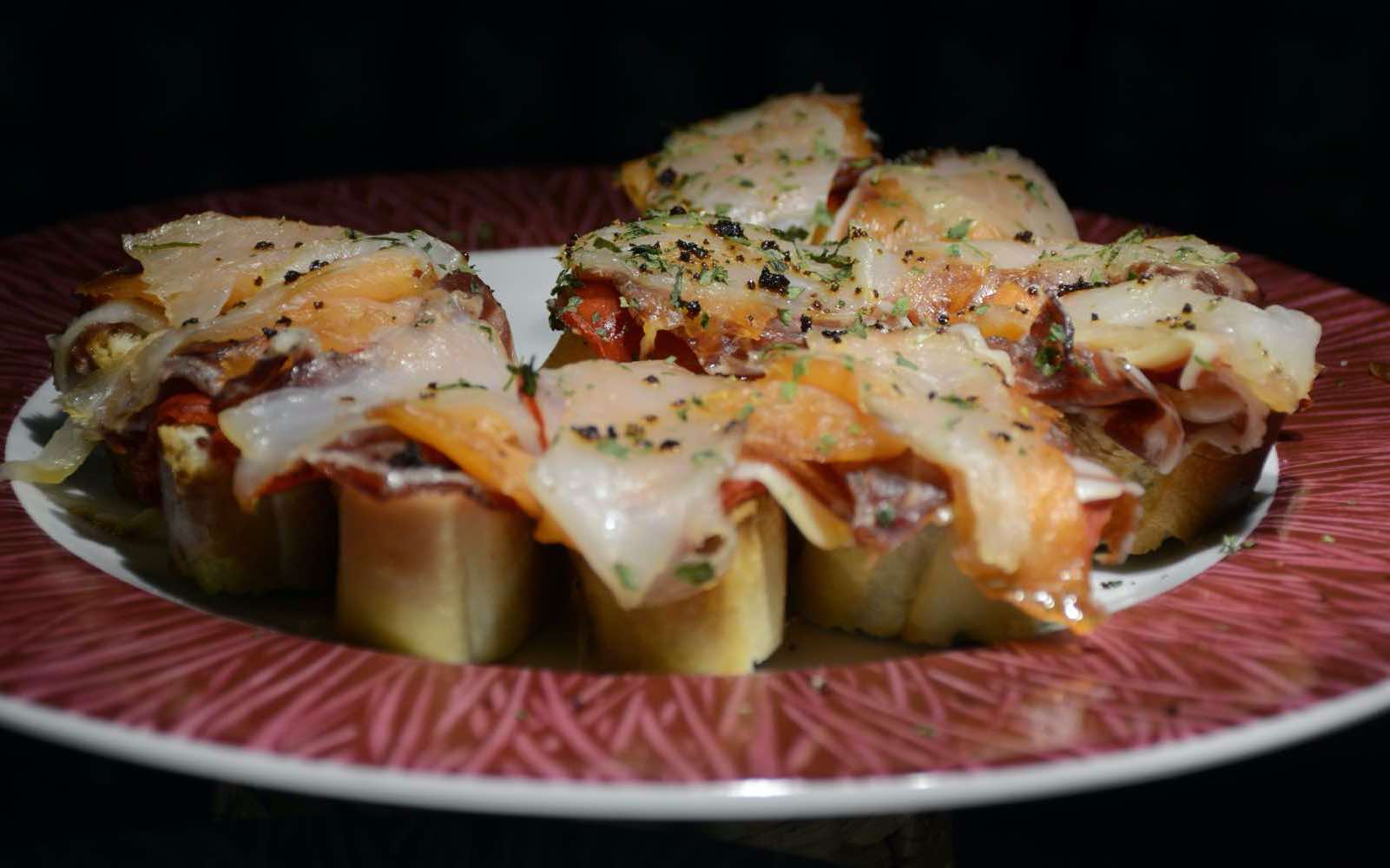 There’s no better way to discover the authentic taste of Spain. Go for a Tour of Spanish Flavour

SPANISH TAPAS: In Spain, tapas have been popular for centuries and where ever you are in this country, you are never far from a tapas bar. The ongoing trend has evolved into a perfect and sophisticated variety in Spanish cuisine. The trend isn´t just about food but includes greater social sharing of food and beverages. Tapas in Barcelona is a must try.

Most typically, tapas are served along with a drink. In Andalucía, mainly in the eastern part of the region, the tapas are still free and the drinks are still cheap. In northern Spain, they are called pinchos, or pintxos in Basque area.

Tapas are served hot and mostly as an aromatic cold dish. This is related to a social event, a way of living, and a Spanish philosophy. Wine or beer in a caña /glass are the most popular drinks.

The word comes from tapar, which in Spanish means “to cover” or “lid”. Do like the locals do and sample a tapa at one bar, then hop on to the next place. Here you have a guide for going out for tapas and choosing what to eat in Spain.

The tapas scene in Barcelona has grown into a culinary movement where top chefs use their talents to these small dishes. Some run by Michelin-star chefs. If you ask Barcelonians to name their favourite tapas bars, Bar de Pla will come up. And for good reasons. The cooking is seasonal and fresh, with bestsellers like the squid croquettes, mushroom carpaccio, and Iberian port blade.
Address: Carrer de Montcada, 2, 08003 Barcelona, Spain.

Order Pincho de Tortilla, or a piece of tortilla, and the traditional Spanish omelette will be served. Made with eggs, potatoes and olive oil, most certain also onion. It is also known as a tortilla de patata or potato omelette. It is not only served as a tapa, but also as a main dish and a filling for sandwiches.
Along with cured ham, tortillas are probably the most commonly eaten Spanish dishes you’re going to find and served in pretty much every bar.

Patatas Bravas are crispy, golden potatoes topped with a bold, spicy red sauce and a creamy garlic aioli. It´s served with roasts potatoes, instead of frying them.

Gambas al ajillo is truly a classic Spanish tapa. Enjoyed all over Spain with slight variations, reflecting the culinary identity of each region. For example, in Seville, gambas al ajillo is prepared with manzanilla, a local sherry. In other parts of Spain, you will find brandy, sweet paprika, different varieties of hot peppers, or lemon juice on the ingredient list. Also called camarones al ajill and sometimes traditionally served sizzling hot.
With rich, garlic flavour, this recipe is quick and simple to make at home.

Cured ham is popular and if it is Iberian ham, even better, Spain´s Jamon Iberico is claimed to be the world’s best ham and comes from a breed of pigs that descended from wild boar.
The best way to experience and taste the meat is to eat it without an accompaniment. Just simply as it is – or with bread. Read more about Spanish Ham

Most well-known cheese are Manchego, from the south-central region of La Mancha, and Idiazabel in the Basque Country. Then Roncal from Navarre, a region north of Spain, Mahón in the Balearic Islands and Majorero in the Canary Islands. Spain has more cheeses for your next tapas night.

These small, lightly breaded fritters include delicious Spanish cures ham, and they aren´t hard to re-create at home. Crispy on the outside and creamy on the inside, they are a sure hit with a glass of beer or wine.

No matter where you go, olives are the most common tapas in Spain. Mostly before your food is ready, they will serve a free tapa of Spanish olives. Some are also stuffed olives normally with anchovies or peppers.

Calamari is battered squid cut into rings, friend in olive oil and served hot. Normally with creamy garlicky mayonnaise, popular all over the country.

Although ham croquettes are the most traditional type of croquette, you can also increasingly find them made with wild mushrooms, king crab, squid, prawns, cod or different types of strong cheeses, like Cabrales.

Simply steamed mussels are perfect for a night where you are in hurry. Just add some crusty bread to soak up the rich, sea-tasting broth. A typical flare is with saffron, which adds a golden glow to this seafood.

Bread, tomato, olive oil, garlic and salt. This is typical tapas Barcelona in Catalonia, where it is also known as pa amb tomàquet. Depending on tastes, ham, cured meats, tortilla or cheese may be added.

Together with ham, these are two of the most popular cured pork products served as tapas. The first is made with rice and the second is served grilled or cooked in cider. Other popular pork tapas include picadillo, chopped and breaded meat, and chicharrones and torreznos, made mainly from fat.

Where tapas are called pintxos. Gilda is served in the Basque Country and is very simply. Take a cocktail stick, an olive, a salted anchovy and one pickled Ibarra chilli peppers and – there you have the perfect pintxo.

This tapa is fried eggs served over a bed of ham and friend potatoes. The bread to dip into the egg yolk. Some other popular versions substitute the ham for baby eels, prawns or other cured pork. Also known as huevos estrellados.

This seafood is similar to squid, except cuttlefish has more flavour. Served grilled with mayonnaise or aioli sauce. Known as ¨Sepia a la Plancha¨ in Spain. In many places, fried chopitos, similar to cuttlefish but smaller in size, are popular, which in Andalusia are known as puntillitas.

Paella is the most popular dish in the Valencia region. Its main ingredient is rice and it is made with vegetables and, depending on the type, with meat or seafood.

Also known as Pulpo Gallego. It´s grilled octopus and a traditional tapa from Galicia, served all over Spain today. This octopus is served with boiled potatoes, olive oil, and sweet paprika.
If you freeze the octopus first it will cut down the cooking time. This one pairs nicely with a dry white wine – or vinho verde.

Anchovies marinated in vinegar, olive oil, and minced garlic is a traditional and popular “tapa” in Spain. Known as Buquerones, a good tapas bar has this favourite on the menu. The taste is milder than sardines, and the texture is more delicate. As for anchoas, or cured anchovies, the very best come from the Cantabrian Sea. They are served in simple fashion, on a slice of toasted bread.

Stuffed mussels, Tigres or Mejillones rellenos, are the most popular tapas in northern Spain. Mussels are chopped and mixed with onion, pepper, tomato sauce to form a delicious filling. They are then breaded and lightly fried.
In Galicia you’d drink a glass of Albqrino from Rias Baixas or a glass of Godello with this, both would be good choices.

No dish is more representative of the Canary Islands then papas arrugadas. These tiny potatoes are a classic in the Canaries and a must try when visiting the islands. They are boiled and covered in salt and served with mojo, a sauce with a rich flavour.

Mostly found in Andalusia where it is served in a paper cone, prepared with a spice mix. Pescado frito means “fried fish” or called Pescaito frito. It is usually served hot, freshly fried, or as an appetizer with fresh lemon.

This is a cold dish prepared with boiled potatoes, mayonnaise, tuna, egg and various finely-chopped vegetables and pulses, such as carrots, peas or green beans. One of the most common dishes in any Spanish tapas bar. Also known as the world-famous Russian potato salad.

It´s main ingredient are bread crumbs fried in olive oil and various other ingredients to give the dish flavour. These can include chorizo, bacon, peppers, garlic and onion. There are many varieties, with some adding grapes, others substituting meat for cod fish. Originally introduced by shepherds as a typical breakfast of hunters in southern Spain. Also made in Portugal.

Two typical cold soups from Andalusia, usually served in the summer. Tomatoes and olive oil are the main ingredients. Gazpacho blends more vegetables like onion and pepper, whereas salmorejo is only tomatoes and a clove of garlic. Gazpacho is often drunk from a glass, while salmorejo is served in a howl.

Empanadillas is a meat or tuna-filled turnover, is the most popular dish from Galicia, a coastal area in the northwest of Spain. Empanadas are typically large and round and cut into pieces to serve as tapas. The filling usually includes tuna, sardines or chorizo.

A tapas classic. Pimientos de Padrón are small peppers that come from Galicia, in the northern part of Spain. They’re fried in oil and salted, and every so often a few of them will have an extremely spicy flavour. Sure, to be found on the menu on just about every single tapas bar. This pepper took its name from the town of Padrón, northwest corner growing these little peppers for ages.

Things do to in Barcelona – Heart and Groove

Learn salsa, feel the groove, and see spectacular attractions. Fashion, art, food and football. This is Barcelona and things to do.
Read more
Drinks

A Pope without wine is like king without a kingdom. For fish-dinner, Pope Francis prefer a glass of white wine from Marche region of Italy.
Read more
Classic

Italians love risotto, even a child knows it contains only five basic ingredients. But the variations are endless – all over the foodie world.
Read more

Things do to in Barcelona – Heart and Groove

Learn salsa, feel the groove, and see spectacular attractions. Fashion, art, food and football. This is Barcelona and things to do.
Read more

A Pope without wine is like king without a kingdom. For fish-dinner, Pope Francis prefer a glass of white wine from Marche region of Italy.
Read more

Italians love risotto, even a child knows it contains only five basic ingredients. But the variations are endless – all over the foodie world.
Read more